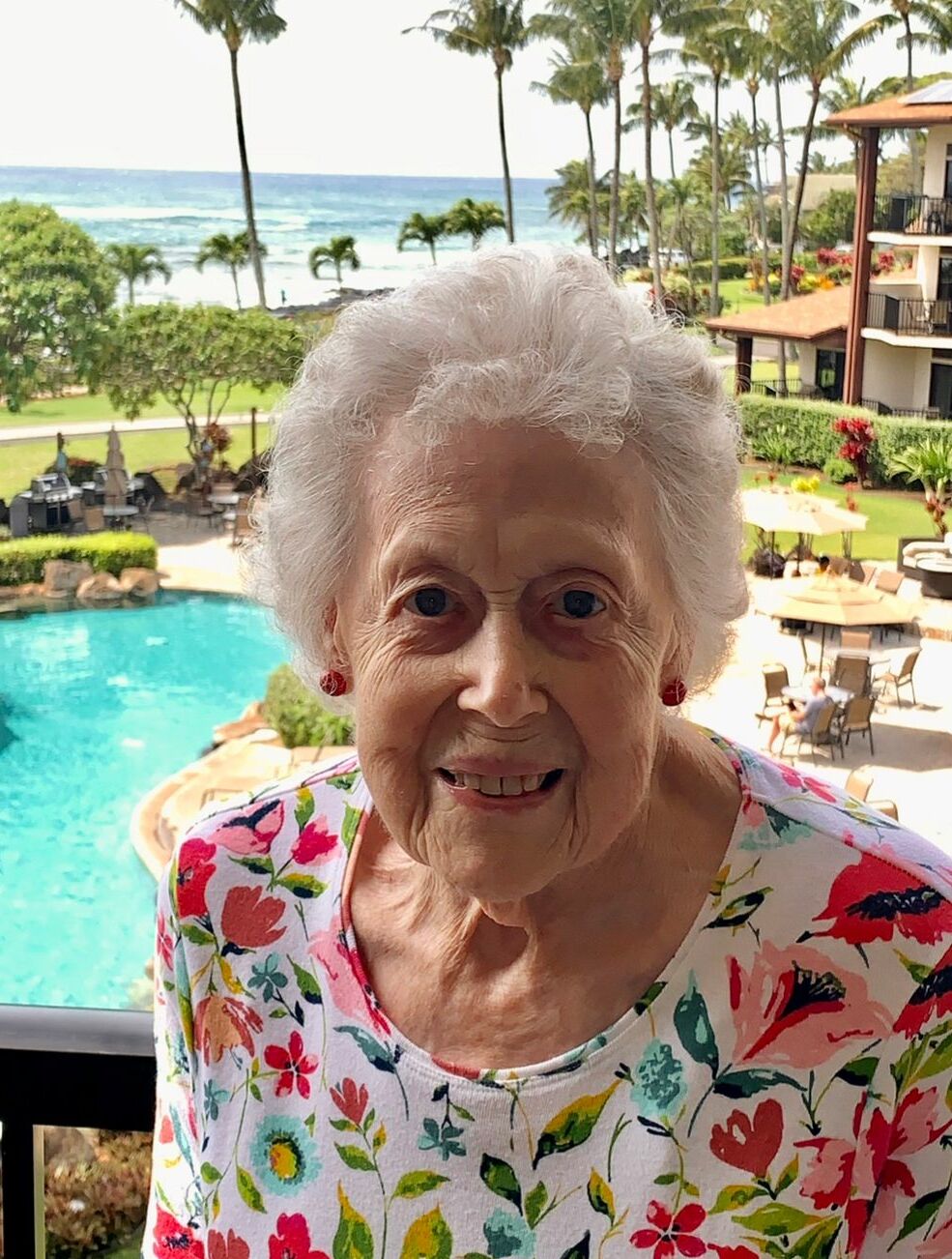 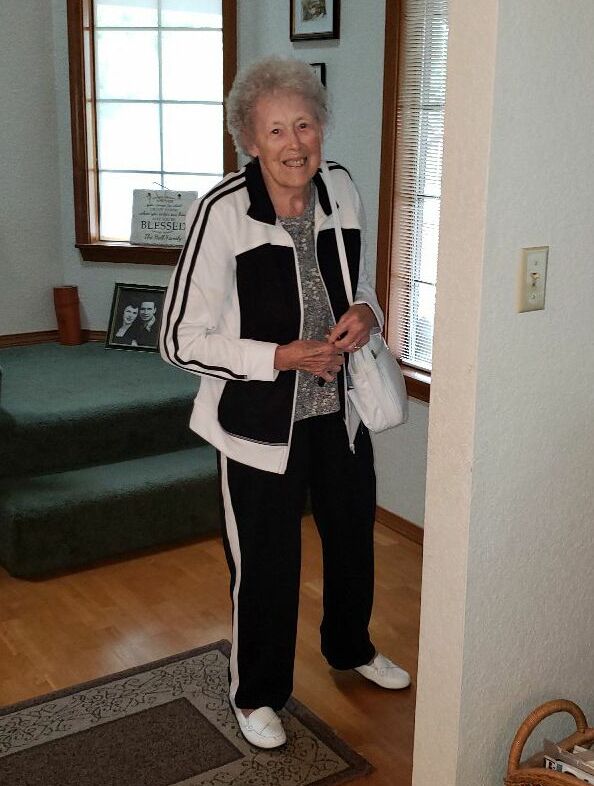 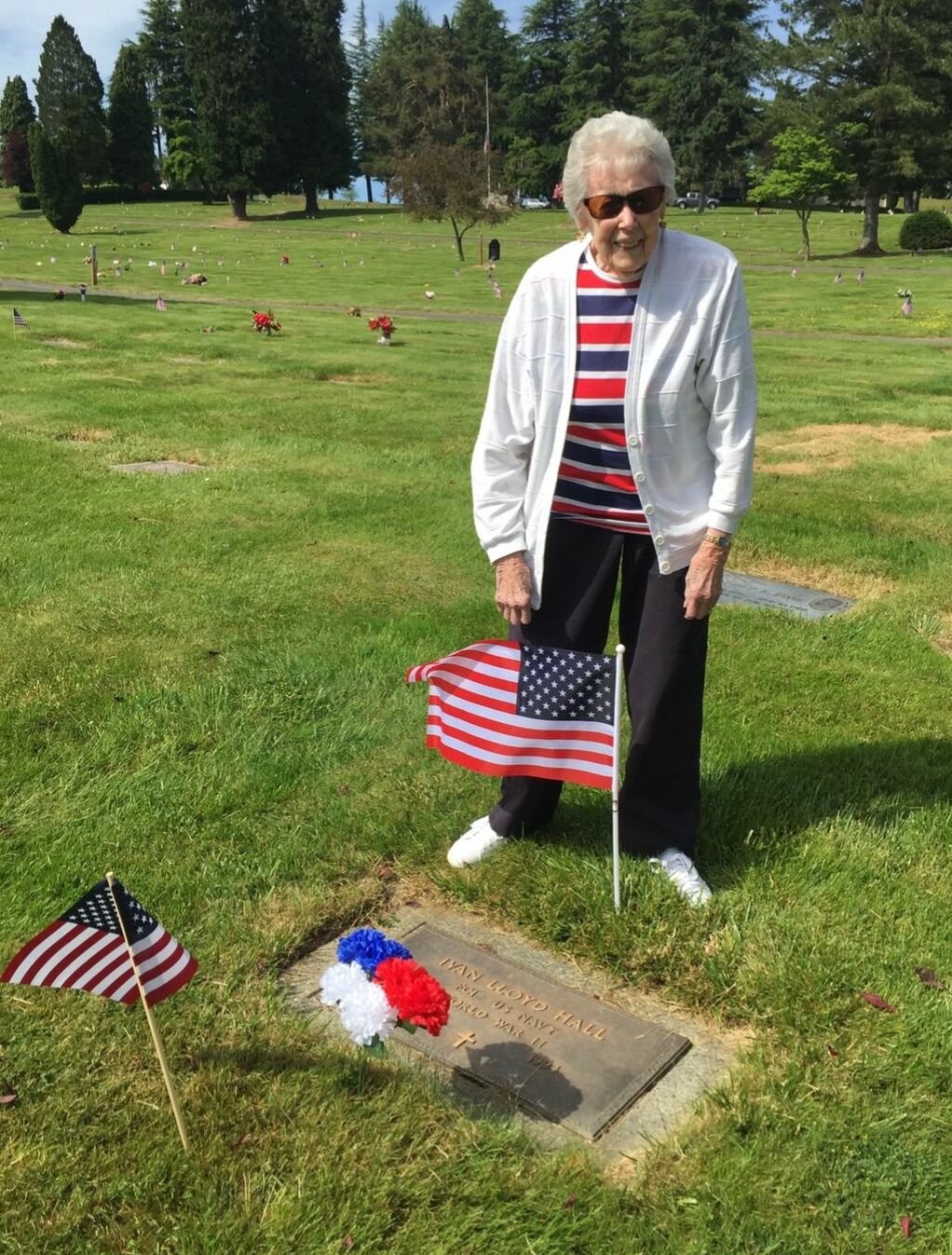 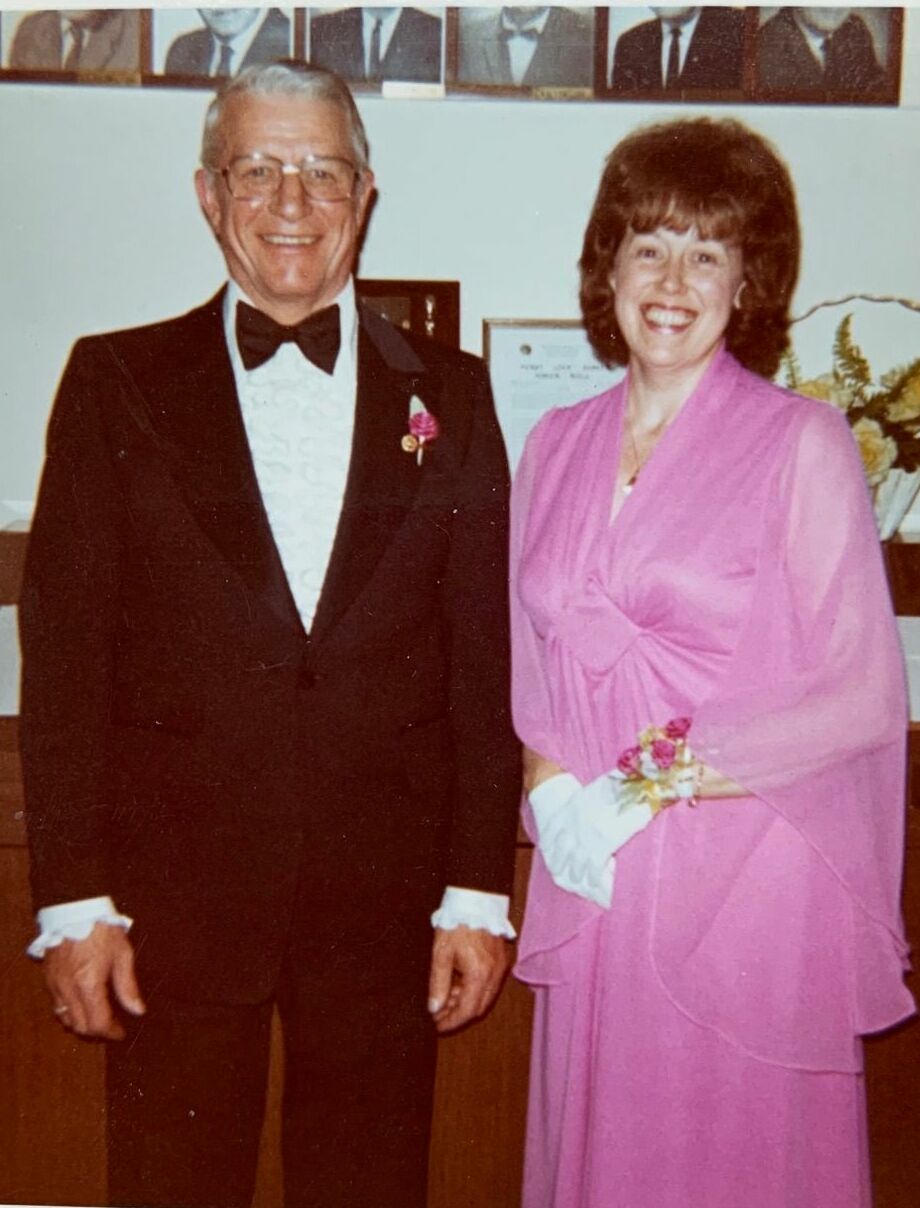 Elnore was born and raised in North Olmstead, Ohio, to parents, Leon and Nellie (Flora) Varney on February 28, 1927. When Elnore was a teenager, the family relocated to Florida where she attended St. Petersburg High School and worked as a waitress. Job offers at The Boeing Co. brought her and her parents to Washington State where she worked on a production line (our own Rosie)! While renting a room near the UW Greek Row, she and her friends mingled with the Navy sailors until a handsome sailor named Ivan Hall caught her eye. The war was over and Ivan was home from Pearl Harbor. The two were inseparable and married in 1945. They made their first home in Renton, where their two sons were born; and then moved to Puyallup where two daughters were added to the family.

As a young mother, she was active in everything for her 4 children: School Room Mother, Little League Score Keeper, Cub Scout Den Mother, Brownie and Bluebird Leader, and more. She was always the first to volunteer! Daughter Betty played the viola in the Tacoma Junior Symphony and had weekly piano lessons. Daughter Lynne was Miss Poppy of 1966 for the American Legion.

As soon as all the kids were in school, she went to work at Pohlman’s Variety Store, also known as the local “dime store”; and then worked for Citizens State Bank. With her cheerful and outgoing personality, her boss assigned her to New Accounts where she welcomed new customers to the bank. In 1985, she retired from her banking career at Rainier National Bank.

Through the years, Elnore and Ivan enjoyed traveling with friends. The guys would sit in front and the ladies in the back seat with a carefully selected cooler of snacks for the road. They also attended reunions and visited relatives and friends across the US. When Ivan served on the Puyallup City Council, Elnore was supportive and broadened her participation in city events. They were active in community organizations such as Amaranth, The Masonic Lodge, Jobs Daughters, The American Legion and the American Legion Auxiliary. They held leadership positions, gained life-long friends near and far, and developed a passion for philanthropy. Honoring our country’s veterans held great importance in their hearts. They attended local ceremonies, visited cemeterys to adorn family graves with flowers, and taught their children the important etiquette of handling and displaying the American Flag.

After Ivan passed away in 1994, Elnore became more active in the First Christian Church, and joined Eastern Star, as well as the Red Hats while also staying involved with Amaranth and the American Legion Auxiliary where she served as their treasurer for many years. In 2018, she was presented with a 50 year membership certificate. She was a cancer survivor who never let it slow her down. She was a friend to many and remained loyal to her bank retirees and Red Hat Sisters attending monthly lunches until just recently.

Her greatest joy was her grandchildren and time spent with her family. She loved entertaining for the holidays and was the grandma everyone wanted to visit in her 1950’s downtown Puyallup home. As the family grew bigger, the house seemed to grow smaller and soon every room had a table set for the holiday meal to accommodate all. She was blessed with the company of her children and grandchildren often. For the past four years, she lived with her son, Don, and daughter-in-law, Linda in their Edgewood home. She was considered to be their “Senior Roommate”.

You may have seen her outside of her house on 5th street every year during the “Puyallup Fair” as she waved her orange flag at passing cars looking for a spot to park on the block. Or you may have seen her selling popcorn and hot dogs at a charity concession booth at the “King Dome”; or serving coffee to sleepy drivers at local truck stops. Or you may have seen her working at the Puyallup RV show or at her favorite event, the Victorian Country Christmas. She finally retired from these events in her 80’s.

In addition to her parents, she was preceded in death by her husband, Ivan Hall; her son, Bill Hall; and her brothers, Raymond Varney and Robert Varney; as well as countless friends and relatives. All of whom she looked forward to rejoicing with upon her arrival in Heaven.

She is survived by her son, Don Hall (Linda), daughters Betty Stanford (Mark) and Lynne Satomi (Yaz), and daughter-in-law Susie Hall (Bill).  Her legacy extends to many, many grandchildren, great grandchildren, and great-great grandchildren as well as numerous nieces and nephews. She will forever be remembered by her kindness, her caring, her compassion, and her love. She will be greatly missed by all who knew her.

Burial will be held at 11:00am on Thursday, Oct. 28 at Woodbine Cemetery in Puyallup, with a Memorial Service following at 12:30pm at Bethany Baptist Church 713 S. Hill Park Dr., Puyallup, WA.

To send flowers to the family or plant a tree in memory of Elnore Hall, please visit Tribute Store

Share Your Memory of
Elnore
Upload Your Memory View All Memories
Be the first to upload a memory!
Share A Memory
Send Flowers