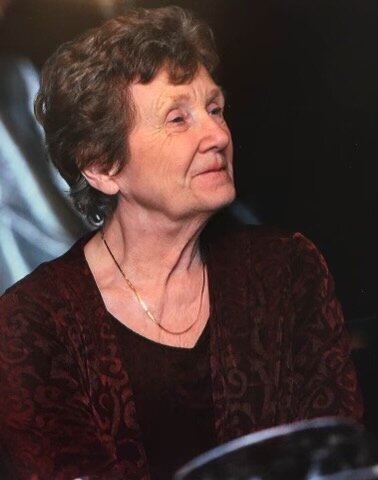 Patricia Ann Alboucq was born in Winchester, Idaho on November 23rd, 1937 to John and Thelma Adams. Along with her brother Jim, they lived in a remote area, with few luxuries. Pat attended Lewiston High School, where she met Buc. After a whirlwind romance, Pat knew she met her soulmate, and they soon married in 1954. Pat was a working mother to Deb, Stewart and Terry, and was a waitress, accountant and interior decorator. But it was arranging travel that was Pat's passion and forte. She attended Clover Park Travel School, graduating in 1976 and found employment as a travel agent for Travel Center of Tacoma.

After gaining experience there, Pat and Buc moved to Kirkland, Washington and opened Travel Office Inc. in 1978. Pat was a huge success and set benchmarks in travel customer service and efficiency. She was proud to achieve certification as a Certified Travel Consultant, using it daily in air, cruise and rail arrangements. Pat and Buc traveled the world, becoming experts in all facets of travel.

Pat also loved to travel by motorcycle and saw most of the US and Canada behind Buc, on their Goldwing. Pat closed Travel Office in 2000, moving to Lacey, Washington and became a Mobile Notary. There, they did hundreds of signings until Buc's untimely death in 2014. In her final years, Pat lived a quiet life with her daughter, Deb, and son-in-law, Robert, in Puyallup, Washington. She passed away on May 29th, 2022. Pat was also preceded in death by her beloved son, Stewart, in 2016. She is survived by her daughter, Deb Bacon, wife to Robert, Terry Alboucq, husband to Rosalina, and daughter-in-law, Karen Alboucq, along with eight grandchildren and twenty-one great-grandchildren. A private service will be held.

To send flowers to the family or plant a tree in memory of Patricia Alboucq, please visit Tribute Store

Share Your Memory of
Patricia
Upload Your Memory View All Memories
Be the first to upload a memory!
Share A Memory
Send Flowers