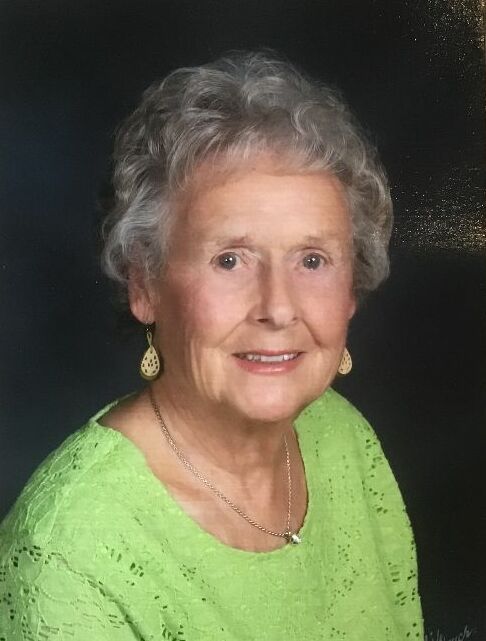 Our beloved mother, Barbara Jane Jacobs, passed to eternal life on November 24th, 2021, in Puyallup, Wa., at the age of 98, surrounded by her loving family. We cannot even begin to convey the importance of this matriarch to our entire family and to her many friends, but our lives revolved around hers and the void she leaves is gigantic.

Mom was born on May 27th, 1923, in Berthoud, Colorado, to parents Harley and Grace Butler and joined 2-year-old Bill, d.1945. Five years later they were blessed with sister Geraldine (Cherry Milligan), d. 2011. Mom was always devoted to her family: parents, siblings, husband, children, nieces and nephews, grandchildren and great grandchildren.

The Butler family soon moved to Idaho to join extended family and mom went through school in Buhl and Twin Falls, where she graduated with the class of 1941. Mom stayed in touch with many of her classmates over the years and enjoyed her class reunions, including their 70th in 2011. Mom was an excellent athlete through her life. She grew up dancing and teaching dance from a young age and later was a basketball player. Mom held the family record for scoring 32 points in a game, until son, Bill, broke her record when he played for Rogers High School.  Mom learned to play tennis in her 50’s, became an excellent player, and enjoyed the game with her husband and friends at the Puyallup Valley Tennis Club, later at Bally’s, and on the courts at Ala Moana in Honolulu.

In 1941-42, Mom attended Idaho State College and earned her highest grades in popularity and socializing. She then moved to Seattle to work during the war years and to be close to her parents who had by then moved to Puyallup. Our mom met our dad while they were both out on blind dates with other people. They were married in August of 1948, and from this marriage came Thomas E (Gaye L); Jane E (Richard Lake); William “Bill” (Cheryle); Edmund “Ed” (Deborah Armstrong); and John Timothy “Tim” (Lesli Jacobs McHugh). Mom’s daughters in law and son in law were just daughters and a son to whom she did not have to give birth and they played a huge role in her life. Mom had very special relationships with each of her grandchildren, such that most of them thought they might have been her favorite. The grateful but broken-hearted grandchildren include Joshua Jacobs (Kelsey); Rebecca Brown (Eric); Andy Jacobs; Katin Jacobs-Lake (Kyle Heinemann); Kellan Jacobs-Lake (Alia); Allyson Jacobs-Lake; Jaime Benedict (Josh); Sue Ann Jacobs Shelton; Sam Kontos; Adam Jacobs (Jocelyn); Ryan Jacobs; Zan Hatfield (Ryan); Jordan Jacobs (Adrienne); and Brynn Warner (Michael).

Mom was preceded in death by her husband Edmund F Jacobs, her son Tim Jacobs, and her granddaughter Anjuli Jacobs. Mom has delighted in her time with her 28 great grandchildren and her home is still filled with toys.  She also loved her role as Aunt Barbara and will miss all of the Milligan’s and our dad’s extended family members who she claimed as her own.

Besides raising 5 children and managing our busy lives with sports, music lessons and performances, our club activities and school functions, and keeping us alive and fed during our summers at our beach home near Redondo, mom found time for her own activities including Chapter AN PEO, bridge club (of which she was the last surviving member), service clubs, golf club, dance club, and lots of tennis. In the past 20 years, Mom found new friends and bridge partners in her Harvest Gate community. She played her last game a couple of months ago and proudly reported that she won high prize.

Mom and Dad had the privilege and joy of being able to travel around the country and world. Some of Mom’s favorite trips were to the Mississippi River, Greece, Wales, Egypt, Japan, South Africa, China, Mexico City and our family trips to Mazatlán at Christmas. Mom and Dad spent two months in Honolulu every winter enjoying time with lifelong friends and new friends from the tennis courts.

Contributions in Mom’s memory can be made to the Tim Jacobs Scholarship Fund through the Greater Tacoma Community Foundation, the Maude Jacobs Walker Scholarship Fund attached to the Walker Awards at the four Puyallup High Schools, to Chapter AN PEO, or to the Puyallup United Methodist Church.

To send flowers to the family or plant a tree in memory of Barbara Jacobs, please visit Tribute Store

Share Your Memory of
Barbara
Upload Your Memory View All Memories
Be the first to upload a memory!
Share A Memory
Send Flowers