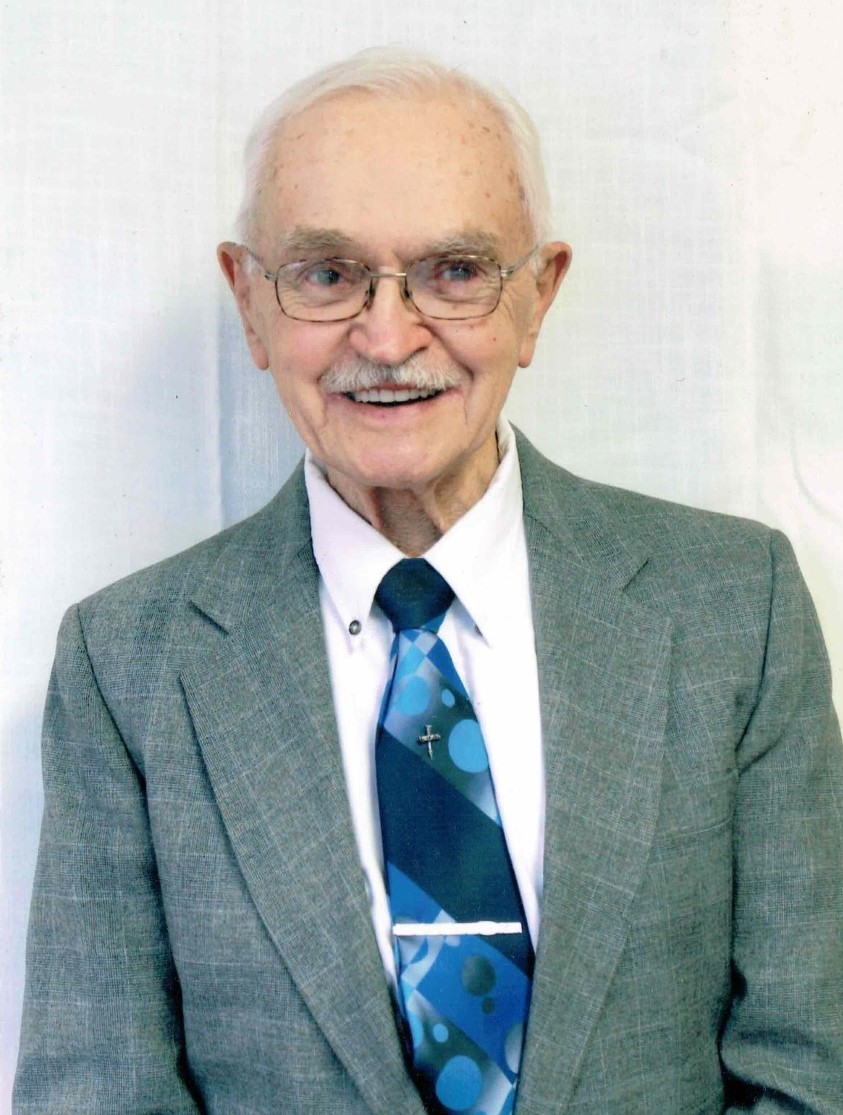 Stanley Moe Sr. of Puyallup died peacefully on June 5, 2021 at the impressive age of 92. He wanted you to know it's not a age he recommends people live to. As the embodiment of the Protestant work ethic, his 92 years of honest hard work, hiking, biking, gardening, child-rearing, beating cancer, and proselytizing added up in the end. After his beloved wife of 55 years, Grace,  passed in 2014, he proclaimed that he had a "5-year plan" and then he was good to go to heaven. Perhaps he knew then what 92 would bring, but years of clean and healthy living gave him a couple bonus albeit not recommended years. He was an overachiever.

Born to Arthur and Esther (Lambert) Moe on September 1, 1928 in Bellingham, Stanley was a pillar of the Puyallup community for over 60 years, where he lived with wife Grace, a private music teacher and church organist, and raised his three children: Stanley Jr. (Puyallup), MariEsther (Las Cruces, NM), and Richard (Seattle). In addition to his children and their spouses (Penny, Eric Burnham, and Ashley Thorner), Stan was blessed with two grandchildren (Thomas Burnham, 17, and Bowie Thorner Moe, 10) and survived by his older brother Art Jr., of Phoenix, AZ, another overachiever.

Stanley had one of those idealized "good ol' days" childhoods, running through verdant fields on a 25-acre family farm in Sumas, WA, right on the Canadian border, where his father worked as a customs agent. It's where he learned that Protestant work ethic. As he liked to quote from his grandfather Ole Olsen Moe, "I'm happiest when I'm in the motion," which is not proper English, but his grandfather was from Norway, so we let it slide. It's also where he got his love of cows and always told his children they were deprived because they hadn't learned how to milk them, as he and brother Art had to do every morning before school. But he ended up raising his children in Puyallup, where zoning laws didn't allow him to have cows in his backyard.

Stanley was an outdoorsman and a lover of God's creation. He was a climber of mountains, hiker of trails, a sometimes catcher of fish, a cross-country skier, and peddler of many a bike trail. He loved his garden and grew some tasty tomatoes and corn. He especially loved weeding, kneeling down in the dirt and bringing order to natural chaos. He loved it so much, in fact, that he was always on the lookout for more gardens to tend, more weeds to pull, and yards to mow, helping friends and neighbors who were in need of a more orderly yard.

Rather than following in the professional footsteps of his ancestors - blacksmith, homesteader, farmer, customs agent, cow owner - Stanley ended up forging his own path as a math teacher. After a short stint in the Korean War, where he analyzed artillery accuracy and shell velocity using that math, he returned home to finish his studies and landed a job teaching 5th grade in Montesano, WA. He met Grace at a family Christmas party in Sumas, where relatives were plotting to fix her up with his younger brother Maynard. They were married eight months later.

After getting hired by the Puyallup School District, the newlyweds moved into a rental house where Tiffany’s Skating Rink was later built, and they brought Stan Jr. home one year after that. Shortly thereafter they purchased the house where Stan would spend the next 60+ years, a too-small-for-cows property that was within walking distance of Puyallup High School.

Stanley did in fact began walking to Puyallup High School where he was hired to teach math; he liked it so much he stayed for the rest of his career. He taught generations of Puyallup students to love Geometry, or at least he tried - he settled for "like" or "tried hard and passed just barely", though at least HE loved it and loved teaching. He also was one of the leaders of the Hiking Viking club, and enjoyed using those math skills selling tickets at Puyallup High sporting events. He was a Viking through and through, as befitting his Norwegian ancestry, though I don't see him as the raiding and pillaging type. Indeed, he would have made a very lousy 9th century Viking - more "turn the other cheek" than "eye for eye."

He retired after 30 years but, happiest when "in the motion," he was not one to squander that free time; he had a thriving side business working to make yards orderly, often coupled with community service that usually involved gardening tools. He also continued teaching math, tutoring for a number of years. He and Grace loved exploring the West Coast with their 18' trailer in tow, and even got to see a bit of the larger world with cruises to Alaska and the Mediterranean. He loved spending time with friends and enjoyed a good party (of the potluck-in-the-church-social-hall variety). He was generous with his time and friendship, the first to volunteer to help anyone in need. A truly Good Samaritan.

Stanley always said his priorities were "God, Family, Friends, Work" so we'd be remiss not to mention his number one priority. He was a longtime member, deacon, Sunday school and vacation bible school teacher, choir member, and general doer-of-things at Puyallup First Baptist, where Grace played organ and directed choir for years as well. As mentioned, he was a constant spreader of the good word, and was quick with a pamphlet, devotional book, or a prayer to all in need. Indeed some of his last words were an out of the blue, loud outburst of "Praise God from who all blessings flow."

Unlike so many these days, Stanley actually practiced what he preached. WWJD was what Stanley would do. His devotion was genuine and earnest, and provided the strength to survive the passing of his wife, his mother when he was only three, and younger brother and sister. He was not afraid to go, even if his body kept going long past when the doctors and his 5-year plan thought it should. He was looking forward to a good party with his loved ones when he got to heaven.

Stanley always taught that you leave your campsite better than you found it. And in the end, that's what Stanley has done with this life. He has left the world a better place during his time with us. Let's all try to do what Stanley would do.

To honor Stanley, and in lieu of flowers, please consider donating to the Puyallup Schools Foundation. In your donation, please reference the Stan Moe Mathematics Scholarship fund, set up in our dad's honor, to raise a new generation of math lovers.

To send flowers to the family or plant a tree in memory of Stanley Moe, please visit Tribute Store

Share Your Memory of
Stanley
Upload Your Memory View All Memories
Be the first to upload a memory!
Share A Memory
Send Flowers