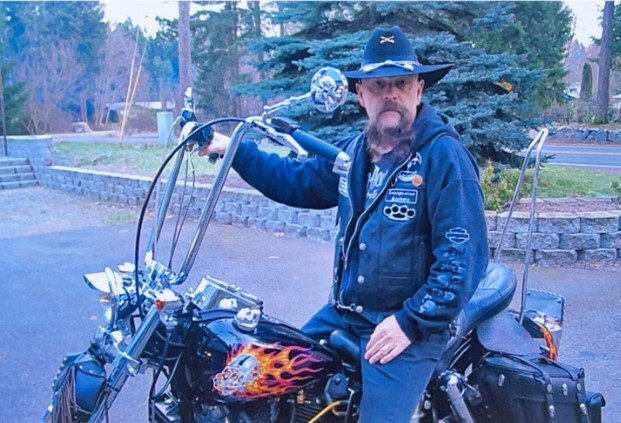 The Puget Sound lost one of its most recognized mustache wielding friends with the passing of David “Skullman” Williams, 66 of Puyallup, WA on February 24th, 2021.

Dave was born in Lebanon, Oregon on September 11th, 1954 and grew up in both Aberdeen, Washington and Pittsburg, California where he graduated from Pacifica High School in 1974. In 1973 he met and fell instantly in love with his future bride and later married Patrishia Cathleen [Campbell] Williams in 1974. In his youth David also discovered a passion for serving as a volunteer firefighter for Contra Costa County fire department leading to his pursuit of firefighting professionally as a career.

He attended training at Lackland AFB, TX in the winter of 1974 with the unique accomplishment of having only one discrepancy Form 341 pulled by his instructor who told him “nobody gets thru basic with zero”. This spurred a career long tendency Dave was known for by calling it like it is with a menacing glare saying: “That’s BullShit” After basic he went on and excelled during technical training as an Air Force Firefighter.

David was soon assigned to the McChord AFB Fire Department in Tacoma Washington. It was here that Dave and Cathy built and raised one family with their first son Kristopher and second son Logan. Simultaneously Dave gained a second family amongst the brotherhood at the station he served with for 30 years. Dave completed his enlistment of four years and then he accepted a positionb as a civilian firefighter and rose to the rank of Captain.

Dave was known for his no-nonsense and absolute commitment in everything he did and to those he cared for, staying true to his mantra: “Never do anything half-assed.” For example, during the holidays early in his career he spent days off from the station doing loss-profession for a local retail store so he could provide great Christmas memories for his family. Later in his career, he spent his days away from the station serving the American Federation of Government Employees where he eventually became Union President.

After 30 plus years of 24 hours on, 24 hours off at the station Dave hung up the turn-outs and donned his black & orange going to work for Destination Harley Davidson. His second career was also one of passion selling parts for motorcycles he’d been a fan of since he was a young boy. During his 17 years at Destination, Dave the “Skullman” was known across the Pacific Northwest for his expert knowledge in what every Hog rider needed to keep their steel horses on the road.

Skullman played hard as well with a wide array of hobbies. Even calling them hobbies is a bit misleading because he committed 110% to everything since second place was not an option. As he would preach to his boys “When you commit...commit!” Dave loved country western dancing so much he traveled the country competing, teaching, and judging competitions with Cathy and friends. Skullman also loved the competition of the poker tables sporting his James Caan “Eldorado” hat and a skeleton ring on each finger. Traveling itself was another joy of his as he visited either by motorcycle or plane places such as Cancun, Sturgis, Hawaii, Jackson Hole, Canada, and the lights of Reno and Las Vegas. Wherever he was, Dave was known for putting others before himself, for standing up for what was right even for those he didn’t know, and for loving his wife, kids, and grandkids more than anything in the world.

A memorial service will be held at 11:00 am, Friday March 5th at Hill Funeral Home, 217 E Pioneer, Puyallup, WA. There will also be a graveside service at 1:00 pm at the Orting Cemetery. Due to Covid-19, gathering limitations will be in place.

To send flowers to the family or plant a tree in memory of David Williams, please visit Tribute Store

Share Your Memory of
David
Upload Your Memory View All Memories
Be the first to upload a memory!
Share A Memory
Send Flowers