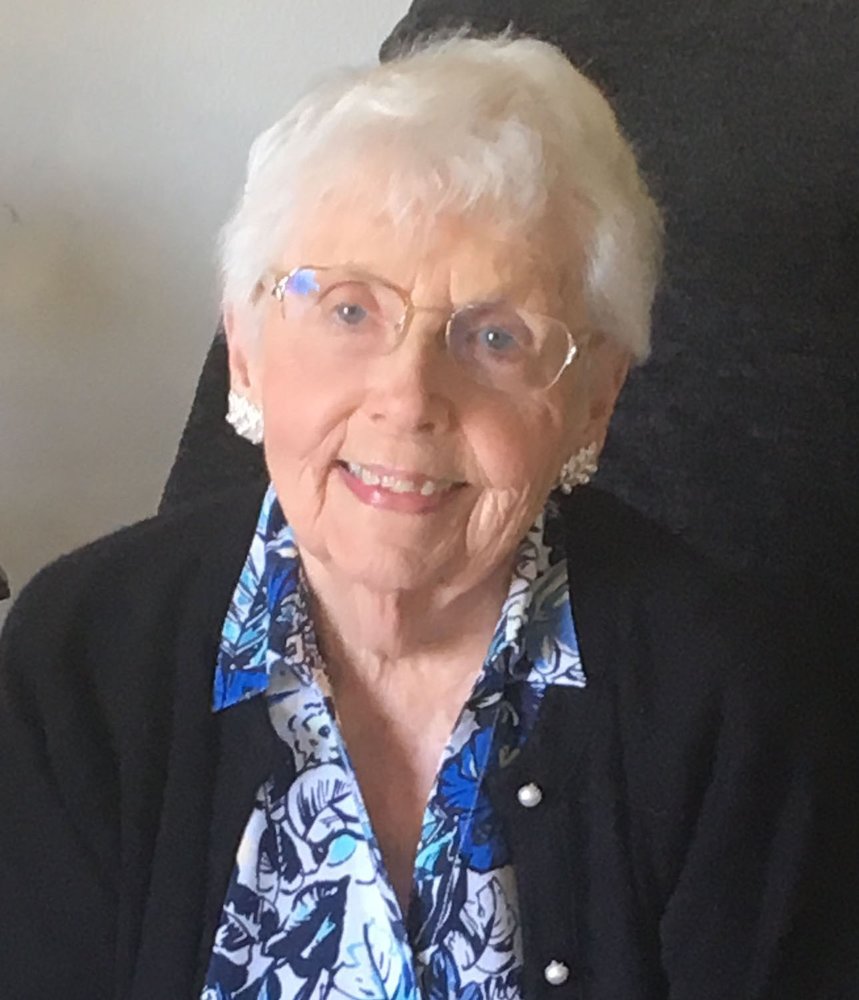 Emma Jean (Emmie) Jones passed peacefully into the arms of Jesus on Friday, December 11, 2020 at the age of 92.

She was born on September 11, 1928 in St. Joseph, Missouri to parents Alva M. Adams and Amy G. (Kellerman) Adams.  When Emmie was 12 years old, the family moved to Seattle, Washington where her father opened his roofing business.  She graduated from Queen Anne High School in 1946, attended the University of Washington for two years then went on to the Cornish School of Music.  While in high school she met Kenneth Jones and they were married in 1950, a marriage that which lasted 67 years until Ken passed away.  They began their married life in the small town of Glenwood, Washington; then Everett, Tacoma and finally Puyallup. Emmie loved her family and was a wonderful homemaker who enjoyed cooking, baking and raising her three children.  She was a talented seamstress, often sewing clothes for her children and grandchildren.  When her children were older, she worked for ten years as the school secretary at Concordia Lutheran School.  Emmie loved to sing and had a beautiful soprano voice.  She sang in the church choirs and in a group called “Ladies Musical Club of Tacoma”.

She attended Good Shepherd Lutheran Church and was a long-time member of the Calvary Baptist Church in Tacoma, where she served as Sunday school teacher, Bible study leader and deaconess.  She also volunteered in the AWANA program and sang in the choir, and shared a visitation ministry to shut ins.  Her final years were spent at Bethany Baptist Church in Puyallup where she enjoyed being part of the Young at Heart Sunday school class.  For many years Emmie loved attending Bible Study Fellowship (BSF) where she not only formed many friendships but greatly enhanced her knowledge of the Bible.

Mom had a special place in her heart for animals.  She was known to take in more than one stray dog or cat, give them a home and they became pets.  She especially loved her scruffy looking black poodle mix she named “Vanna Black”.

Mom loved to laugh and had a great sense of humor.  She was known to prank people from time to time, something she learned from her father at a very young age.  He also gave Emmie the nickname “Toots” and is still known as “Auntie Toots” to many in the family.

She was preceded in death by her parents, her brother Robert Adams, nephew Steve Adams, son-in-law Richard Maillard, and her dear husband, Ken.

Emmie is survived by 3 children, Glenn Jones of Vancouver, Washington, Carol Rolf of Puyallup and Janet Jones (Maillard) of Puyallup; nephew Ron Adams of Seattle and many great-nieces and nephews.  She was grandma to Jeremy, Jill and Lindsey Rolf; Melissa (Eyester) Jones and Kristin (Buehler) Jones.  She also leaves behind eight great-grandchildren, Pearl, Paul, Katelyn, Natalie, Jackson, Zachary, Brooklyn and Lexie, all of whom she dearly loved.

Graveside services were held Friday, December 18, 2020 at Woodbine Cemetery, where she was laid to rest beside her beloved husband, Ken.  A memorial service will be held sometime in 2021, depending on the Covid virus.  The details will be announced at a later date.

Emmie will be remembered as a loving wife, mother, grandmother, great-grandmother and friend to so many.  But most of all, as a godly, Christian woman who loved the Lord.

To send flowers to the family or plant a tree in memory of Emma Jones, please visit Tribute Store

Share Your Memory of
Emma
Upload Your Memory View All Memories
Be the first to upload a memory!
Share A Memory
Send Flowers