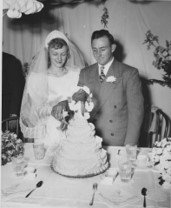 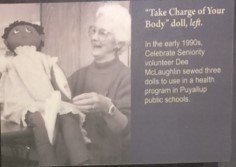 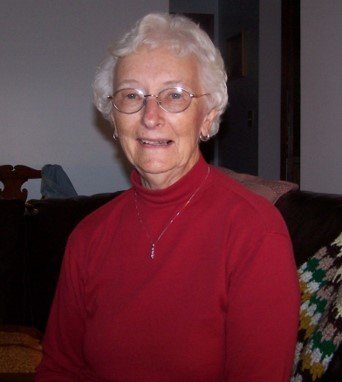 Devona “Dee” McLaughlin was born Devona Olga Veda Ek on July 27, 1929. She was born to William & Olga (Carlson) Ek near the small hamlet of Rose City, Minnesota. William and Olga’s parents were both born in Sweden, and Swedish was the household language for Devona until starting school. To her family, she has been known “Vony”, or “Vona”. In later years her friends and fellow workers knew her as “Dee”. She had 7 brothers and sisters, all of whom departed this life before her. When Devona was a child her father referred to her as, “my little Dolly.”

Devona’s father was the village blacksmith in Rose City. Devona’s mother died when she was just 9 years old and unfortunately her father was unable to care for all of the younger children, so the family was split apart. The younger 3 kids, Devona, Bud (Laurel), and Carol went to live with aunts and uncles. Three of the older children (Dorothy, DeLoryce and Lester) went with their father to live in Montana, and in reality were left to fend for themselves. The oldest two children, Clara and Lloyd were already out of the house. Devona and her younger brother Bud (Laurel) lived with their Aunt Agnes and Uncle George Davis in Rose City during the long Minnesota winters, where her Uncle George ran a service station and repair shop. Then, when school let out for the summer, they lived with their Aunt Hazel and Uncle Hjalmer on their farm, and helped out with farm chores. Agnes and Hazel were sisters of Devona’s mother Olga. Devona loved staying in Rose City, as her Aunt Agnes was very loving, and she didn’t have to do farm chores. Being raised by hard working relatives, Devona learned how to garden, bake (which she loved!), embroider, sew and developed many other skills that were required in the rural environment where she was raised, like raising chickens, slopping hogs, cleaning fish, and milking cows.

Out of necessity, Devona and her siblings were fighters. Not in the sense of being violent, but with the determined effort to move forward with their lives, sometimes on their own, sometimes with help from family, and often with friends that became like family. They had grit. Foundational to this was their Christian education at home and church, and a strong faith in a loving God.

Life changed for Devona, when after finishing high school in Alexandria, Minnesota, she met Maurice McLaughlin. Devona had a part time job in Rose City working at a diner/tavern across the road from her home with Agnes and George. Every now and then Maurice (Mac or Bud as he was called) would drop into the diner. He had just finished a tour of duty in the Navy during WW2, and his family had bought a farm near Rose City. As things go, Bud and Devona began to date, and very much enjoyed roller skating, at which they became quite adept, skating to music as a couple.

​Devona and Maurice were married at Spruce Hill Lutheran Church in Minnesota on October 22, 1949. After they were married they lived and worked on the farm with Hjalmer and Hazel, and had their first two children (Wayne and Alan). After a few years there were hard times on the farm. Their dairy cattle contracted brucellosis and couldn’t bear calves. As a result of this, the dairy farm operation became untenable, and Devona and Mac made the difficult decision to move to Montana and start a new life. They settled in the town of Shelby, Montana, where Mac worked for Devona’s eldest brother Lloyd, at his gas/service station there. A few years later, their daughter Cindy was born to them, and Mac left his service station job and accepted a position with the US Postal Service. To help make ends meet, Devona made extra money ironing clothes for people, and Mac, during his days off, drove truck for Consolidated Freightways.

In 1967, Devona and family moved west to Washington state upon Mac’s transfer by the USPS, and settled in the lovely town of Sumner.Mac was taken suddenly from the family on July 2, 1977. Devona worked for the Sumner School District for a number of years, using her superb baking skills to benefit area kids.n She retired in 1989, and traveled throughout the world having many adventures with her friends Francis and Sam, and her niece Mary (Christofferson) Fiebranz, including trips to Hawaii, Australia, and Europe. She was an active volunteer with Celebrate Seniority and sewed 3 dolls for a health program in Puyallup Public Schools. She was an active member of Calvary Community Church from its founding days when services were held at Maple Lawn School in Sumner. She was famous in the Senior Group for her pies.

Grandma Dee, as she became known, passed away February 7, 2020 at the age of 90 at the home of her daughter, Cindy (McLaughlin) Ghormley. Cindy was at her bedside when she passed. Grandma Dee has 3 children, 8 grandchildren, and 9 great grandchildren, with another on the way. She had a strong faith in the Lord, and is beloved by her friends and family, and especially those that owe the gift of their lives to her. Grandma Dee was quiet, loving, yet strong.

She was laid to rest next to her husband Mac on Valentine’s Day at Sumner Cemetery in a simple graveside service.

Share Your Memory of
Devona
Upload Your Memory View All Memories
Be the first to upload a memory!
Share A Memory
Plant a Tree