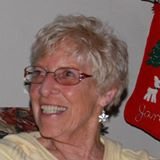 Pamela J. Vetter, Walsh, Schloer passed away Monday, February 10th, 2020 from COPD.  She was born February 1st, 1939 to Joyce and Edward Vetter and raised in the north end of Tacoma, WA.  She attended Sherman Grade School, Mason Junior High and graduated from Stadium Hight School in 1957.

Shortly after graduation she married Jack Hannah and had two children, Janis and Jim.  Pam and Jack were divorced in 1961 and soon after Pam married John Jensen.  Sadly, she was widowed 17-months later when John was killed in an automobile accident.

Pam lived as a single mother and worked at Mutual of New York Life Insurance Co. until she met Bob Walsh in 1966.  She and Bob were married that same year and went on to have three children together: Lyn, Joe and Patti.  Pam enjoyed being a stay-at-home mom and became very active in the Waller Road PTA for many years; serving as Vice-President, Treasurer and Way & Means Chairman.  She was also a founder of the Waller Road Booster Club where she served as Treasurer.  Pam enjoyed going to all of her kids’ sports events: baseball, basketball, soccer, track and tennis.  One of her proudest accomplishments was coaching Patti’s softball team for 7 years.

In 1984 Pam went to work at U.S. Oil & Refining Co. and served as the plant payroll clerk until 1995.  Later, she worked part-time in the payroll department at the YMCA of Pierce County.

She and Bob divorced in 1988 and in 1994 she married Roland Schloer.   After retirement, Pam accumulated over 9000 happy hours volunteering at Grannie’s Attic Thrift Shop in Puyallup.  She and Roland also enjoyed traveling around the U.S. in their camper and visiting most of the states.

Funeral services will be at Hill Funeral Home in Puyallup on Saturday, February 22nd, 2020 at 11:00am.  Pam’s request is that donations be made to the American Lung Association in lieu of flowers.

Share Your Memory of
Pamela
Upload Your Memory View All Memories
Be the first to upload a memory!
Share A Memory
Plant a Tree