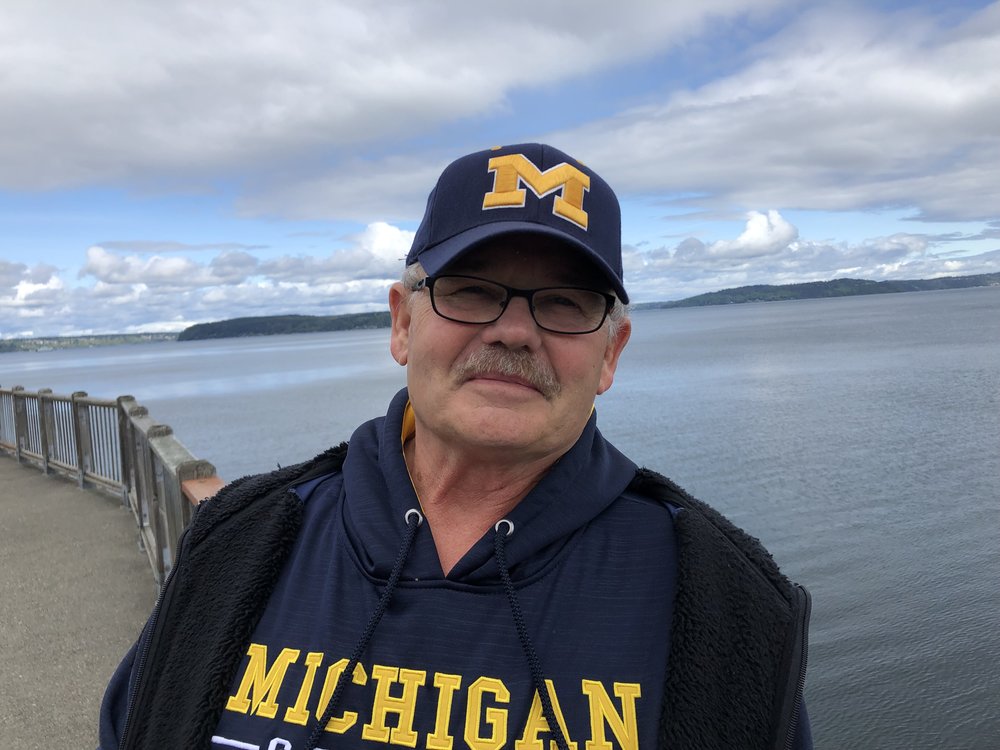 My sweet darling husband went to be with our Lord and Savior peacefully at home on December 19, 2019.  Even though we know he is in God’s capable and loving arms, he will truly be missed by family and friends.  He will always be remembered in our hearts as a wonderful and caring husband, devoted father and the best fun-loving Grandpa and Uncle ever.

Born in Kalamazoo, MI to Arthur and Elizabeth (Walters) Lajiness on April 23, 1950, Bill was the fifth boy in the Lajiness family.  Throughout his school years, he enjoyed playing sports, football a favorite.  He graduated from Loy Norrix High School in 1968.  Bill would often recall growing up in Michigan and the fun on their family vacations; camping in tents and the many trips they took as a family to the Wisconsin Dells, Washington DC and many states across the country.

Looking for work, Bill moved to Houston Texas when he was just twenty-six, where he lived until his move to Washington state in 1989.   In 1994, we married and made a home together in Puyallup.  We were best friends, and each found our love of a lifetime.  Bill became a husband, dad and grandfather all in the same “I do”.

In Texas, Bill spent ten years in sales with Coca Cola.  When he moved to Washington, he worked for Tim’s Cascade Potato Chips (where we met) and later for Pepperidge Farms then Reser’s Fine Foods.  Ready to make a change, in 2001 he went to work for Pierce Transit as a transit operator (teasing him I said you mean “bus driver”) where he retired in 2017.  He was a great bus driver.  The people loved him.  They knew him as the happy fun guy he always was.  They also knew him from his trademark beret.

I would be remiss if I did not mention that I gave Bill a nickname (a habit I have).  It was Gubner.  For short, the kids call him “Gubs and Grandpa Gubner”.  Silly but it stuck and was actually fitting for someone so special to all of us, family and friends alike.

An avid sports fan, Bill kept his allegiance to his home state supporting University of Michigan Wolverines.  He always wore the blue and gold colors.  No matter where he went, someone shouted out “Go Blue”.  With a huge smile, he responded proudly.

His love for God, family and country were unwavering.  He was proud to serve his country when he enlisted in the US Army after high school.  He was disappointed to leave the military but had to for medical reasons.

My dear darling husband had a very strong faith in God.  Even after he was told of the pancreatic cancer in August, he remained positive, never complaining or asking why.  Instead he would say “God has won the war.  It is all in his hands”.  Our faith has helped to keep both of us strong through an unimaginable situation.    We are blessed to be members of the Puyallup Motion Church.  We have made many great friendships there.

The celebration of life to honor my sweetie will be Monday, January 20, 11am, Motion Church, 601 9th Ave SE, downtown Puyallup.   Luncheon to follow at Puyallup Eagles Club, 202 5th St NW, Puyallup.  Donations can be made to Puyallup Eagles Cancer Fund.

I know that family and friends’ hearts are breaking with mine.  I want to thank you all for your love, friendship and kindness.  We truly appreciate the support of Pastor Yoel Bartolome and his guidance through this difficult time.

Missed but never forgotten.  Love you puppy!!  God is good!  All the time!