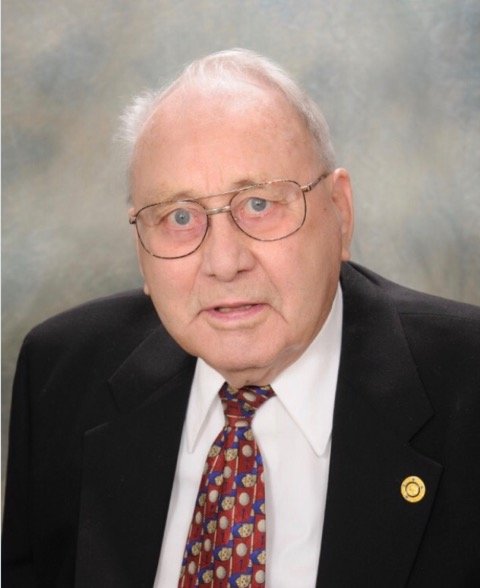 Puyallup – E. Arthur Larson, age 95 passed away peacefully on August 13, 2019.  Art was born in Astoria, Oregon on August 17, 1923, the second child of Rev. E. Arthur (Sr.) and Ebba (Anderson) Larson.  He is survived by his wife of 71 years, P. Lorraine (Akehurst) Larson; three children, Curtis, Susan and Darold (Beth) Larson and three grandchildren; Bryan, Hannah and Carrie Larson; brother, Richard (Sharon) Larson of Puyallup, and sister-in-law Maria Larson of DuPont.  In addition to his parents, Art was preceded in death by his sister Dorothy (Marv) Harshman, and younger brothers, Robert and Roy Larson.

The family moved to South Tacoma in 1927, all graduating from Lincoln High School and later, collegiately, from Pacific Lutheran College.  Advancing two grades, Art graduated from Lincoln at the age of sixteen in 1940 and PLC in 1947.  College was interrupted in 1942 with the outbreak of WWII; he served in the Navy in the Pacific Theater and was on the island of Okinawa when the war ended and was in Tokyo Bay on VJ Day.  Art also served in the Korean War and continued a proud tenure in the Naval Reserves for 28 years with a final rank of Commander.

An educator, Art spent 31 years in the Puyallup School District, first as a teacher and later Vice-Principal at Puyallup High School, before becoming the first Principal at Rogers High School in 1968.  Whether it is arts and music, athletics or serving the community, he believed fervently in a well-rounded education.  Upon retirement, Art continued to stay busy, most notably as an adjunct professor at PLU from 1982-1994, and also as Superintendent for catering and transportation for the Washington State Fair.  At nearly age 90, his last job was as a volunteer at the City-County building in Tacoma.

Art was the Floor Foreman (15 years) during the summers at Valley Packers, a football coach (1948-65) and track coach (1949-63) at Puyallup High School, and a member of the Washington Interscholastic Athletic Association board of directors.  He was a Rotarian, (beginning in 1968, serving as President and with 40 years of perfect attendance).  He served eleven years as a Director of Good Samaritan Hospital, including several terms as President, and he was an active member at Mt. View Lutheran Church where he served several stints as President along with being a member of the choir and organist for the church, Art lived a full life.

To send flowers to the family or plant a tree in memory of E. Arthur Larson, Jr., please visit Tribute Store

Share Your Memory of
E. Arthur
Upload Your Memory View All Memories
Be the first to upload a memory!
Share A Memory
Send Flowers