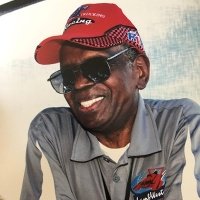 Chuck was born August 21, 1944, in Clovis, New Mexico, the only child of Ray and Mary Love.  He passed away peacefully from cancer on August 9, 2019, in Puyallup, Washington, just shy of his 75th birthday, with his wife by his side.

He received his early education in Clovis and graduated from Eastern New Mexico University with a degree in music.  After graduation he taught music and directed the high school bands in Klamath Falls, and Portland, Oregon for a few years before transitioning to sales, management, and IT where he spent the bulk of his career.

Chuck’s interests included sports, music, cooking, and above all, hydroplane racing, of which he was an active participant.  He was a member of the Seafair Boat Club and the Royal Order of the Turbine, ROT, and was an active volunteer at the races for  over 30 years.

He is survived by Lois, his beloved wife of 30 years, two sisters-in-law, as well as nieces, nephews, and cousins.

Memorials may be made to the Hydroplane Museum.

To send flowers to the family or plant a tree in memory of Charles Love, please visit Tribute Store

Share Your Memory of
Charles
Upload Your Memory View All Memories
Be the first to upload a memory!
Share A Memory
Send Flowers