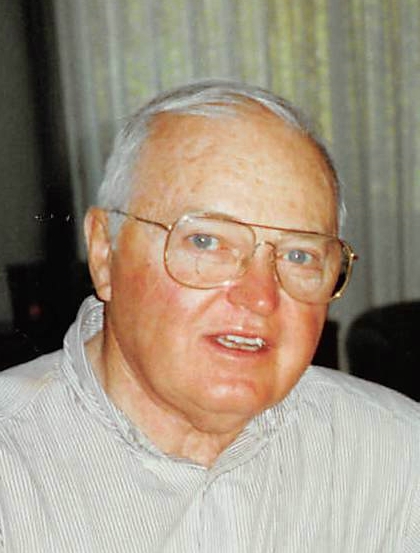 Lawrence Ulysses Rubida Jr. was born July 30, 1928 on the Guillaume Farm in Elk Point, South Dakota to Lawrence Uyless Rubida Sr and Ruth (Ryan) Rubida. Larry passed away on June 8, 2022 at the age of 93.
All of Larry's youth was spent living and breathing farm life. He was the youngest of 6 children and when Larry was 10 his family moved down the road to the new Rubida Farm. He has endless stories to tell of these formative years. A favorite was how on his way to and from school Larry and his siblings were often chased by turkeys and bulls when they would cut across various pastures. After high school Larry made his way to California to see what else life could be. He enlisted with the army at 18, served his two year contract. and went on to work for the Bureau of Reclamation in South Dakota.
Larry rekindled a romance with Ivern Moe on a drive back from a winter survey work trip. After spending only a few days visiting her, it was decided that they would marry, he would quit his job with the Bureau, and he would start college at South Dakota State University.
Larry and Ivern married on June 12, 1953 and spent their first years of marriage in South Dakota while Larry went to school and earned both a Bachelors of Science and a Masters degree in Poultry Science. They moved west to Washington where they raised their five children, eventually settling in Puyallup.
Larry accepted a job as a research scientist for Western Farmer and many happy memories were made living and working on the research plant in rural Puyallup. After leaving Western Farmer, Larry spent the rest of his working life with the State of Washington in the Department of Labor and Industries as a facility planner and analyst.
While Ivern took to traveling the globe after retiring, Larry loved best to be at home. He found great joy putting in and tending for a large garden. Larry had much interest in his family roots and genealogy, taking the better part of 5 years during the 90's to publish a researched book of his life and that of his relatives - "Stehekin: The Way Through. The Journey of Lawrence Jr".
Larry and Ivern were their grandchildren's biggest supporters - attending as many games, concerts, and graduations as they could. Larry enjoyed sharing his lifetime of knowledge with his children and grandchildren. He loved a good sports game and historical shows and documentaries. Larry was a dog man who spoke fondly of the different animal companions he had throughout his life. A little red dog named Princess was his sidekick for the last 10 years.
Larry is preceded in death by his wife Ivern, of what would have been 69 years of marriage this June 12th, his parents, his siblings Reidella, Leatta, Udyene, Alvin, and Arvin, and his son David. Larry is survived by his children Lawrence III, Kathleen, Dan (Shelly) and Patrick, and his grandchildren: Justin (Lea), Adam, Brandon (Britt), Katie (Jake), Madeline, Griffin, Annalise, Teagan, and David Akuien- who is like a grandchild. He is also survived by 6 great-grandchildren.
We find solace that Larry is once again reunited with his beloved wife Ivern, his parents, and favorite brother Al. We love and miss you Dad, Grandpa, Friend!
A service for Larry will be held on June 30th at noon at St. John of the Woods Catholic Church in Tacoma.