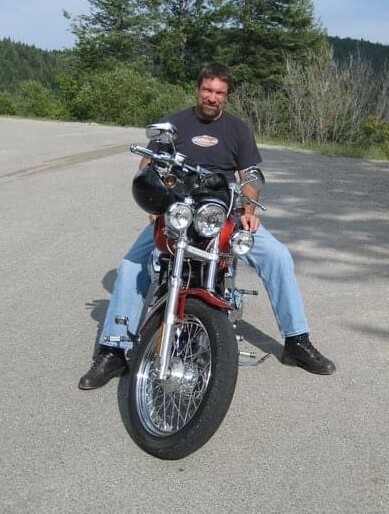 Tim was born March 26, 1965, in Spokane, WA, a son of Ben and Norma Thompson.  He grew up on Pleasant Prairie, Newman Lake, WA and attended East Valley High School.

He worked as an electrician and a Project Manager for Merit Electric of Spokane, WA for 31 years.

Tim loved all sports but especially, golf, his Seahawks, The University of Washington teams, and The Mariners.  His interests also included being at the lake, astronomy, and most of all, riding his Harley.

Tim loved watching comedy and comedy shows and he loved his dogs, Bodhi, Jagger, and Ripper.

Known as “Thompson”, Tim was a funny, kind, and wonderful husband.  He was incredibly smart and could fix anything.  You always knew what you were getting with him.  He was the calm in the storm.  Respected and loved by many, he is gone too soon and will be greatly missed.

Tim is survived by his wife of 10 years, Kirstin L (Hester) Thompson.  He is also survived by his mother, Norma Cyrus; his kids; Sons Jory Zettle (Natalie), Kolton Thompson and Jack S. Peterson and Daughters, Brooke Galasso-Munoz (Nick) and Mariah Thompson and his granddaughter Ava .

Tim was preceded in death by his father Ben Thompson and His brother, Tom Thompson.