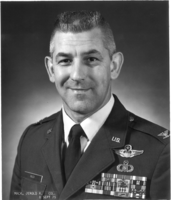 Jerold Rushton Mack, 87, of Puyallup, WA, died December 31st 2020. "Jerry" Mack, son of Phillip and Elizabeth Mack, loving husband to Patricia Andrews Mack, passed away at the Caring Arms Home, where he lived for the Last 19 months due to advanced Alzheimer’s. Jerry is survived by his wife of 66 years, Pat, his 5 sons and their wives; Jerry II & Cynda, Alan, Steven & Vickie, Nathan & Melissa, and Dana. His foreign exchange daughter Roos and her Henri. He is also survived by 25 grandchildren, 15 great grandchildren, 1 great great grandchild, his sister and her husband Linda & Gary West, his sister-in-law Kay Keith and sister-in-law Eunice Mack.

Born August 16th 1933 in the farming town of Busti, New York, Jerry joined the Air Force after graduating High School. As a pilot, Colonel Mack felt a strong sense of duty and served his country honorably for 27 years. He was awarded many commendations including the Legion of Merit, the Distinguished Flying Cross and the Bronze Star.

After the Air Force, Jerry began a 16 year career with The Boeing Company. He went to Saudi Arabia with the sale of AWACS and setup the maintenance and training programs.

Jerry was always there with a helping hand and a smile whenever he saw a need. When he wasn't helping someone paint a wall or fix a roof, you could find him with a golf club in his hand or standing at the wood lathe making pens from exotic blocks of wood. He enjoyed traveling the world with Pat, Kay and Dennis. He loved singing in the choir at church and he loved serving the Lord.

In lieu of flower donations can be made to the American Cancer Society.